Country diary: why did the snail tiptoe across the road?

News from around the world European farmers are on alert after recent outbreaks of highly pathogenic avian influenza among wild and domestic birds in western...
Read more
Latest News

Cat and mouse on the high seas: on the trail...

The ocean is as black as chipped obsidian, yet whichever way you look dozens of bright lights illuminate the water and the night sky....
Read more
Latest News

London the worst city in Europe for health costs from...

The health costs of air pollution from roads are higher in London than any other city in Europe, a study has found. Two other urban...
Read more
Latest News

Why the death of a small, punk-like fish rocked the...

In 1802, when French naturalist Francois Peron slipped a small, chunky Australian fish into a jar of preservative, little did he suspect that his...
Read more

orty-nine early morning lockdown walks, and I’d only been rained on twice. Today balanced the account a little, with raindrops hammering on my umbrella. Not a day for lingering, with a cold wind and scudding grey clouds, but ahead, crossing the asphalt of the lane, was a fellow traveller, almost luminous in the gloom: a white-lipped snail, Cepaea hortensis.

Cepaea shells come in several colour schemes, with variable numbers of thick or thin spiralling brown bands or, more rarely hereabouts, simply bright yellow with no bands at all. Since the 1940s academic careers have been built on fathoming the evolutionary significance of this genetically determined variation within the genus. Climate, habitat and susceptibility to predation all play a part in the local frequency of morphs. 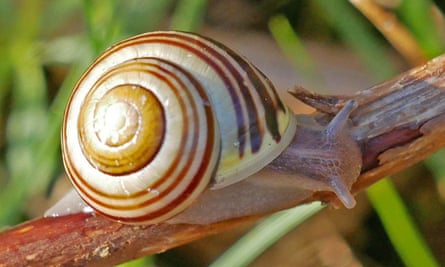 Before I could take a close look, a farm tractor rumbled around the bend and I had to step on to the verge. The snail survived, withdrawing into its shell, hunkered down while wheels splashed past on either side.

The day’s dullness emphasised this mollusc’s beauty: a globular spiral shell, glossy with rain, reminiscent of a freshly sucked lemon drop of the kind that I was partial to as a kid. As I watched, its head tentatively extended from the shell, followed by two antennae that had retracted, like sleeves turned inside out, when danger threatened. It glided serenely away across the rain-soaked road towards safety, propelled by waves of muscular contractions along the length of its foot: nature’s molluscan magic carpet ride. 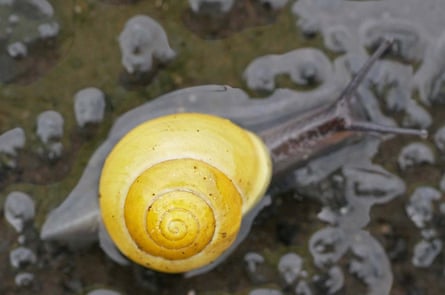 A few mornings earlier I had found a large, conker-brown garden snail, Cornu aspersum, making the same crossing. The asphalt had been sun-warmed, dry and dusty, and its journey laboured. Hot-footed, it self-lubricated its progress with mucus, arching its foot to economise on production of the secretion: the snail-equivalent of tiptoeing, leaving a trail of evenly spaced circular patches of wet mucus, about the size of a five pence piece. Often, on warm summer mornings I find similar trails across flagstones in the garden. By then they are sun-dried and shiny, like a line of silver coins; the garden snail’s calling cards, leading from a row of what would have been, just the night before, precious seedlings.

Microsoft goes after TikToks US business despite Trump

Despite President Trump telling reporters on Friday night that he intends to ban social media sensation TikTok from operating in the United States, Microsoft...
Read more

Nine out of 10 EU citizens want their governments to ban the slaughter of animals that have not been stunned, according to a poll...
Read more

My mum fist-pumped when I told her I had seen a barn owl using a nest box on our farm. She has been trying...
Read more

Stock markets give up weeks of gains in major selloff

After powering higher in recent weeks, stock markets fell backwards on Thursday, with the S&P 500 down 5.9% and the FTSE 100 ending the...
Read more

Golden and white-tailed eagles were once widespread across Wales

Two of the most well-known birds of prey - the golden eagle and white-tailed eagle - once soared high above the whole of Wales,...
Read more
Trading With Politics