More than 30 shorebird species that fly across oceans each year to visit Australia – including nine that are threatened – are being hunted during their long migrations, according to a study that analysed decades of records from 14 countries.

The study, which experts said filled a major gap in the world’s knowledge about the impact of hunting on declining shorebird numbers, found that more than 17,000 birds from 16 species were likely being killed at just three sites – Pattani Bay in Thailand, West Java in Indonesia and the Yangtze River delta in China.

Prof Richard Fuller, a co-author on the study, said that figure was “terrifying”.

“We know hunting is going on at hundreds of other sites around the flyway. It’s highly likely that unsustainable hunting levels are being executed for many species,” Fuller said.

All the birds use the East-Asian-Australasian Flyway – one of nine recognised migratory routes around the globe. Two species – the far eastern curlew and the great knot – are listed as critically endangered under Australia’s environmental law.

Great knots breed in the high Arctic and far eastern curlews in south-east Russia and north-east China – all more than 10,000km from their summer layovers in Australia.

Eduardo Gallo-Cajiao, a researcher at the University of Queensland, coordinated the study, which took five years to complete and appears in the Biological Conservation journal.

“We knew since the 1980s that hunting was still going on, but there was an idea that hunting wasn’t really a concern. It has gone under the radar for a long time,” Gallo-Cajiao said.

“Because these birds fly across vast areas, hunting needs to be measured and monitored considering the cumulative levels of hunting at various places throughout the region.

“Up to now, all we had was bits and pieces of data on hunting from different individual sites, but nobody had pooled them together to get a better picture. It was just like assembling a jigsaw puzzle.” 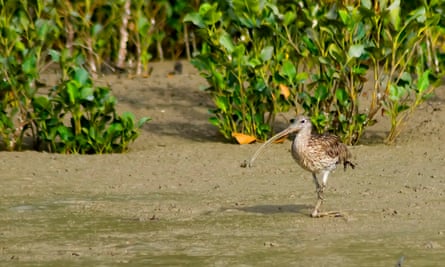 He said the only place where hunting records came from regulated activity was in the Yukon-Kuskokwim delta in Alaska, where indigenous people hunted bar-tailed godwits for food.

Much of the remaining hunting along the flyway – which stretches across 22 countries and Taiwan – was unregulated and likely illegal, he said. Some 61 species were being affected, 37 of which were seen on Australian shorelines.

Migrating shorebirds tend to gather in high concentrations to rest and feed as they make their long migrations, making them predictable and easy to hunt.

As recently as 2019, there was evidence that far eastern curlews were being shot in the Kamchatka peninsula in eastern Russia as they gathered among larger flocks of whimbrels.

The study found there was a lack of coordinated monitoring along the flyway, despite at least 12 of the 61 species appearing on the International Union for Conservation of Nature’s red list of threatened species.

“We need to have a conversation among the many countries in the flyway,” Gallo-Cajiao said.

Two taskforces have been formed to look at hunting impacts – one as part of a voluntary organisation of countries covered by the flyway and another under the UN’s convention on migratory species.

“Hunting is a hidden threat that we’ve known about, but haven’t been able to quantify just how big the problem is,” Fuller said.

Birds were being hunted for subsistence, he said, as well as to trade for food.

Shorebird numbers are declining and Fuller said developments around the Yellow Sea – where many of the migrating birds stop to rest – had robbed them of about two-thirds of the intertidal mud-flats over the past 50 years.

Far eastern curlew numbers had crashed by about 80% in the past 30 years, he said, and the species was listed as critically endangered in Australia in 2015.

He said the hunting records were still too sparse to be confident of the impact on the shorebirds, but at least three-quarters of the 61 species that use the flyway were likely being hunted.

Other hunted shorebirds that visit Australia and that appear on an international list of vulnerable species are the bar-tailed godwit, black-tailed godwit, red knot, curlew sandpiper, red-necked stint, Asian dowitcher and grey-tailed tattler.

Prof Richard Kingsford, a UNSW ecologist who coordinates an annual waterbird survey, said: “This study has filled a major gap.

“It’s great that we are getting a handle on this issue, but it’s not a good story. We know these birds are in trouble anyway, so this is a big concern.”

Dr Steve Klose, manager of the migratory shorebird program at BirdLife Australia, said the flyway could be seen like a pipeline and potential “leaks” from hunting had “moved into focus” in the past two years.

“We can see that the flow to Australia is diminishing and we have suspicions that there are holes somewhere. We know populations are going down and we are heading for extinctions,” he said.