Markets rise on vaccine hopes, US jobs figures revised up

Apples from ‘perfect harvest’ rot on the ground as demand...

Why David Attenborough is the doomsayer we still adore |...

David Attenborough must be the only person who can appear on national television to tell us that we are all doomed, probably past the...
Read more
Latest News

The UK is at risk of losing the contract for the expansion of a flagship European weather research centre based in Reading because of...
Read more
Latest News

Ingrid Albion has been helping to save whales and dolphins for three decades, but has never seen anything on a scale like this before....
Read more

Markets have opened higher this morning as a joint venture Covid vaccine by Pfizer and Germany’s BioNTech was found to have promising results in early human trials. European bourses are up 1-2% with Germany’s Dax leading the way and US futures pointing towards a 1% bounce on the open. 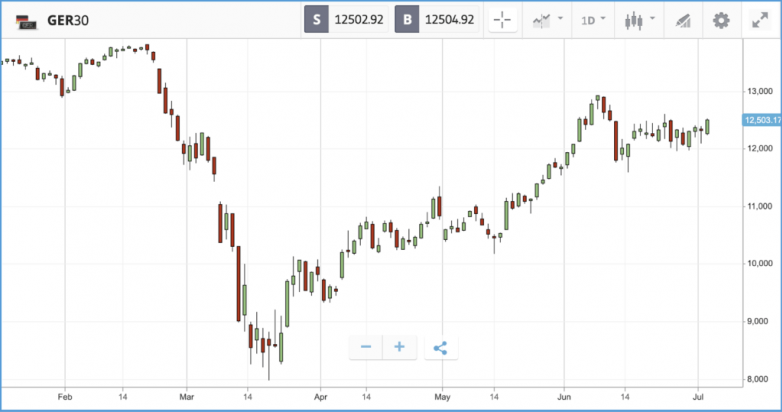 Investors were overwhelmed with information in the US yesterday, with the S&P 500 closing the day up 0.5% after a volatile trading session. Payroll service provider ADP’s private jobs report showed that private payrolls rose by 2.37 million in June, and May figures were revised from a 2.76 million loss to a 3.01 million gain. But in more than a dozen states across the US, reopenings are being rolled back in response to a surge in cases, ahead of a crucial July 4th (Independence Day) weekend.

There were signs of hope in the race for a vaccine, however. Pfizer’s share price jumped 3.2% after announcing that one of its four vaccine projects has produced neutralising antibodies, which are understood to be needed to build immunity to the virus. All participants who received two of the doses generated the antibodies, according to the initial data, at a level multiple times higher than in recovered Covid-19 patients.

In other news, US motor vehicle sales for June were also released, which showed that General Motors, Toyota and Fiat Chrysler all saw sales fall by more than 30% in the second quarter. Nissan was particularly hard hit, with its sales in Q2 dropping by close to 50%. Fiat Chrysler stock closed the day 3.3% lower, while GM fell 1.3%.

After posting gains yesterday, the S&P 500 closed out its best 100 calendar day rally since the 1930s. The index has climbed more almost 40% since the depths it plumbed in March, with firms including Apache, Gap, and PayPal among the biggest climbers over the period. Gap, for instance, has climbed more than 100% since it shed over 70% of its value in the initial markets selloff. The stock remains close to 30% down year-to-date, however.

In corporate news, rental car firm Hertz — which is going through bankruptcy protection — is reportedly in a major stand-off with creditors over 494,000 used cars, which makes up most of its $19bn in debt. Hertz stock, which is currently still trading, jumped 4.3% today although the company is currently facing delisting from the New York Stock Exchange.

Yesterday, the Nasdaq Composite was the biggest gainer of the three major stock indices, closing the day 1% higher while the Dow Jones Industrial Average sank 0.3%. Tech giants helped the Nasdaq higher, with Amazon, Facebook and Netflix gaining 4.4%, 4.6% and 6.7% respectively. Netflix received positive reviews from analysts after announcing it has hired a former Apple exec as its chief marketing officer.

London-listed shares had a mixed Wednesday, with the FTSE 100 marginally down, and the FTSE 250 up 0.4%.

Data from Nationwide showed that UK house prices fell for the first time since 2012 in June, losing 0.1% versus the same month last year, after climbing 1.8% year-over-year in May. The news sent shares in house builder Taylor Wimpey down 2.9%. Broker Hargreaves Lansdown, broadcaster ITV and precious metals miner Polymetal fell the furthest among FTSE 100 stocks, finishing the day down 5.5%, 4.1% and 3.4% respectively.

At the top of the FTSE 250 was asset manager Liontrust, which rose 8.4% after announcing a GBP75 million deal to acquire Architas’ UK investment business from AXA.

In business news, a raft of company layoffs dominated headlines. In the past two days, job cuts announced include 5,000 from catering company SSP Group, 1,700 UK jobs from Airbus, and 700 jobs at Harrods.

US jobs report: The main thing to watch in economic data and scheduled company announcements today is the US job report, which is arriving a day earlier than usual ahead of a public holiday on Friday for Independence Day. The most watched pieces of data coming out of the report will be the change in non-farm payrolls, the unemployment rate, and average earnings.

Those aggregated estimates from economists hide a wide variation among those polled, so surprise results on any of those metrics — which would likely move markets — are a distinct possibility.

US senators on the Senate Banking Committee plan to introduce new legislation this week to compel the US Government Accountability Office (GAO) to conduct a study into the “illicit” activities of cryptoassets online, Coindesk reports.

The amendment, which appears in a larger piece of legislation, acknowledges that cryptoassets are used lawfully in many cases but pushes the GAO to investigate supposed criminal use by traffickers and terrorists.

The Senators want the GAO to study how cryptoassets are used by such groups, and whether they are being used to launder money inside the US banking system. So far the amendment has bipartisan support from the 25-member committee but it is unclear as of yet whether it has support to pass Congress as a whole.

All data, figures & charts are valid as of 02/07/2020. All trading carries risk. Only risk capital you can afford to lose.

Extinction Rebellion to block streets in London, Manchester and Cardiff

XR plans protests next week as activists call on MPs to back a climate emergency billExtinction Rebellion plann to block streets in London, Manchester...
Read more

Life and death: what readers in Australia are seeing post-bushfires

From the eerie absence of birdsong to green shoots sprouting from burnt-out trees, Guardian readers in Australia have shared their stories and pictures of...
Read more

Large heath butterflies are returning to peatlands in greater Manchester 150 years after they went locally extinct. The acidic peat bogs and mosslands around Manchester...
Read more

Thailand has discovered the largest number of nests of rare leatherback sea turtles in two decades on beaches bereft of tourists because of the...
Read more

Play Video 1:30 Video shared on social media shows clear and calm water in Venice as animals take advantage of the lockdown in Italy to move...
Read more
Trading With Politics