Boris Johnson says newts are a drag on the UK’s economy. Here’s why he’s wrong

Country diary: the sacred giants of the dung-beetle world

The year seemed finely balanced as we ambled down to the pond at Little Barbrook in the evening sunshine. Bracken was crisping to bronze...
Read more
Latest News

The wealthiest 1% of the world's population were responsible for the emission of more than twice as much carbon dioxide as the poorer half...
Read more
Latest News

My country may be swept away by the climate crisis...

My country joined the United Nations nearly 30 years ago, in September 1991. But unless my fellow member states take action, we may also...
Read more
Latest News

The Guardian view on a just transition: make the red...

As Britain confronts the unemployment crisis that will blight so many lives this winter, the chancellor, Rishi Sunak, has promised to be "creative" in...
Read more

Lingering in the shallows of a south Norfolk pond, voracious amphibians are resting ahead of a night gorging on slugs, worms and insects. The pool network, long grasses and shrubs in Silfield newt reserve are a perfect habitat for the great crested newt – the pantomime villain for housing developers.

The UK’s largest newt, which takes its name from the striking, jagged crest that males display in the spring breeding season, is a protected species under British law, thanks to the the EU habitats directive, which the prime minister’s father, Stanley Johnson, had a key role in creating. Despite that, its numbers have declined rapidly over the past 60 years.

But measures to protect the great crested newt have become a problem, according to Boris Johnson.

“Newt-counting delays are a massive drag on the prosperity of this country,” the prime minister declared last Friday, urging the UK to “build, build, build” its way out of the economic catastrophe the pandemic has caused.

An unlimited fine and up to six months in prison await anyone found guilty of disturbing the newt’s resting places and breeding sites or taking their eggs, yet the Local Government Association says it is not aware of any evidence to suggest “newt-counting” is causing delays to housing developments in England and Wales. 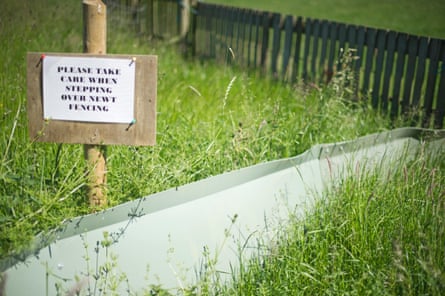 Developers are obliged to take care of great crested newts if the amphibians are believed to be on site or nearby under rules overseen by Natural England. Until the last few years, protecting the amphibians when their habitats were being destroyed by developments centred on catching and counting them and moving them to compensation ponds.

This process led to frequent complaints from Conservative ministers. In 2015, for example, when the then transport secretary Patrick McLoughlin expressed frustration at delays to the building of Ilkeston railway station in Derbyshire, after newts were found on site.

But a fresh approach to the conservation of great crested newts by Natural England and the use of new technologies when surveying habitats, such as eDNA analysis and even, in the case of one water company, the use of a springer spaniel trained to detect the amphibians, has rapidly reduced delays.

Natural England is rolling out a new district-level licensing system that allows developers to avoid a bespoke survey while meeting obligations by making a conservation payment. Money raised from the scheme has been used to create or restore hundreds of ponds.

Before this approach, says Biggs: “A lot of the mitigation work being done just wasn’t good quality habitat, either terrestrial or aquatic, so the newts died anyway.”

In the southern Midlands, the Freshwater Habitats Trust is involved with NatureSpace, which developers pay into in order to meet newt protection rules. Builders pay a fee to the conservation scheme based on the destruction their projects will cause to habitats.

“The counting is not really a delay issue any more,” Biggs says. “It takes them 10 days to sign the forms and join the scheme. We, in the background, have been making the habitats in advance and they are funding the conservation work. 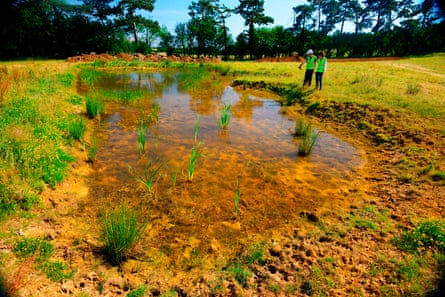 “We’re creating a new network of habitats across the countryside that the newts can spread into.”

As developers smell victory in their decades-long battle with the great crested newt with the post-Brexit tearing up of regulations, conservationists have urged the government to make sure the country’s economic and environmental ambitions are not in competition.

As Stanley Johnson once said: “The Spanish have the lynx, the Romanians and Slovenians have wolves, elsewhere in Europe there are bears. I think we should be proud of our great crested newt. I hope this element of EU environment law doesn’t take too much of a pounding.”

The perils of being black in public: we are all Christian Cooper and George Floyd | Carolyn Finney

In the summer of 1997, I lived in Seattle. I worked at a temp job while preparing to start my master's degree in the...
Read more

News from around the world Pigs and poultry are likely to be safe from Covid-19, according to German scientists, whose study showed that while fruit...
Read more

Human impact on wildlife to blame for spread of viruses, says study

Hunting, farming and the global move of people to cities has led to massive declines in biodiversity and increased the risk of dangerous viruses...
Read more

A blackbird in the sycamore faces into what the poet-novelist Mary Webb might call "green rain", this spring drizzle suspended in the trees that...
Read more

Revealed: Covid-19 outbreaks at meat-processing plants are being kept quiet