The problems began the moment Captain Boris Prokoshev set sail aboard the MV Rhosus in 2013.

He discovered that the ageing Russian-owned cargo ship, bound for Mozambique, was in “terrible” condition, including having a defunct generator. Then he learned that the previous crew had mutinied over unpaid wages. So it was no surprise when the owner told Prokoshev there was no money to pay for fees for the Suez canal, either.

But all of this paled in comparison with what happened when Prokoshev, 70, agreed against his better judgment to make an unscheduled stop in Beirut, Lebanon. The plan was to pick up extra freight to help pay for the Suez canal fees. When they got there, however, the Lebanese authorities arrested the ship for non-payment of port dues.

Prokoshev turned to the owner for help – and according to Prokoshev, owner Igor Grechushkin simply stopped communicating. Prokoshev, his two engineers and a bosun were trapped on the ship. They stayed there, unpaid, for almost a year: caught between the Lebanese authorities and an owner who had seemingly abandoned them.

Supplies dwindled. They had to rely on the port agent to bring food and water. “If he hadn’t brought us water, then we would have died there,” says Prokoshev. Grechushkin did not respond to requests for comment. 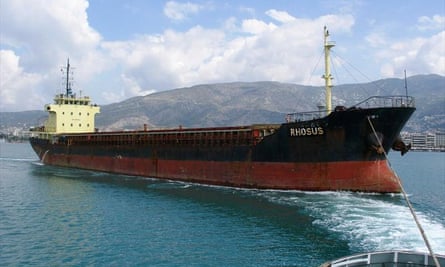 The abandonment of Prokoshev and his crew in 2013 would have even worse consequences, of course, after its unclaimed cargo – 2,750 tonnes of ammonium nitrate, eventually unloaded by Lebanese authorities and stored as collateral in place of their port dues – exploded two weeks ago, killing almost 180 people, injuring thousands and ruining a vast swathe of the city.

The tragedy exposed the dark underbelly of the shipping industry. Every year, hundreds of seafarers are abandoned by their ship owners, left unpaid and stranded at sea. Unscrupulous owners, keen to cut their losses when debts mount, can easily walk away, leaving their crew as hostages, sometimes with dangerous freight aboard.

At least 5,767 seafarers in 438 ships worldwide have been abandoned since 2004, according to the International Maritime Organization (IMO) database. The number is an underestimate: not all cases are referred to the IMO. The Rhosus, for instance, was never listed.

“The flood of calls to ITF in the Arab region has never stopped,” he says. “Since we created the network and seafarers [became] aware of us, the numbers of calls are going up and up.” 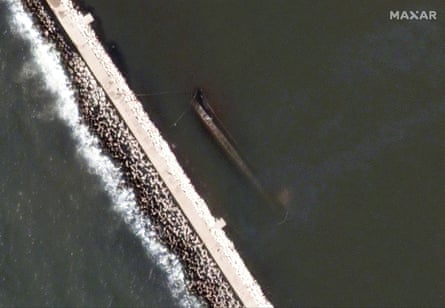 In 2020 alone, 470 seafarers on 31 vessels have already been abandoned. They include the 13 crew members stuck for seven months on the Captain Nagdaliyev – another ship located in Beirut port, which only narrowly escaped the blast.

Samig Nabiyev, the captain, remembers the explosion hitting. “I was on deck. I closed my eyes and I thought I would die,” he says. And yet still the Azerbaijani father of three daughters remains trapped on the ship. “My family are worried. We just want to go home but we want our wages.”

Another potential disaster waiting to happen was the Spanish-flagged Celanova, a petrol tanker in Manila with 15 crew trapped on board.

The broken down, rudderless vessel was carrying a load of liquified gas. It was only following the intervention of the ITF and the International Labour Organization that the seamen were finally taken to land.

Abandonment could “of course” lead to further disasters like the one in Beirut, Arrachedi says. “We only deal with labour and humanitarian issues. But if you are making someone work for 14 months and you are not paying him, you do not feed him, and he does not know when he is going to disembark, that is a bad situation.

If you have very dangerous cargo, with the possibility of human errors on top, it is an explosive situation

“If you have very dangerous cargo, with the possibility of human errors on top, it is an explosive situation.”

In many cases, the crew can’t leave the ship without abandoning their claim to payment. An amendment to the Maritime Labour Convention made it easier for abandoned seafarers to get their wages via insurance, and last year Arrachedi recovered $4.2 million (GBP3.2 million) in unpaid wages, up from $1.7 in 2018.

But the ITF are also left to provide basics to keep crews alive, such as water and food for the crew of the Nagdaliyev. The Malta-flagged oil tanker is owned by the Turkish company Palmari, which did not respond to requests for comment.

“They are very psychologically pressed,” says Arrachedi of the Nagdaliyev crew. “They want to go home and they want their wages. But there is no plan of payment.”

Depending on the country, if cases go to court, a judge can order the sale of the vessel to pay off the debts. But the process can take months and jurisdiction is often murky.

That’s partly because a high proportion of abandonment cases are linked to open registries, or “flags of convenience”, which allows ship owners to shop around and register in a country where regulation is lax. The Rhosus, for example, despite being Russian-owned and captained, was registered in Moldova.

“How did Moldova become the flag state for a Russian-owned, Cypriot-based company?” asked Nautilus general secretary Mark Dickinson. “Yet another example of the lack of a genuine link which allows these terrible events to evolve.”

Stephen Cotton, general secretary of the ITF, said the global economic crisis brought about by Covid-19 and the effect of travel restrictions, quarantines and border closures has already hit seafarers hard, forcing an estimated 300,000 crew to work past their contracts. The system of rules and regulations that should protect them “begins to unravel” at times of crisis, he says.

“No one thinks about shipping until moments of crisis. We have been on every bandwagon, screaming you need to help them. But seafarers are the forgotten people in this story.”

Seafarers are the forgotten people in this story

Prokoshev describes being trapped on the Rhosus for an entire year as “worse than prison”.

In the old days, the Soviet Union would have “stood up for its sailors”, he says. “But now, damnit, every bastard does what he wants.”

He and the remaining crew were finally released in August 2014, after an order by a Lebanese judge. They are still owed $200,000 in unpaid wages, Prokoshev says. 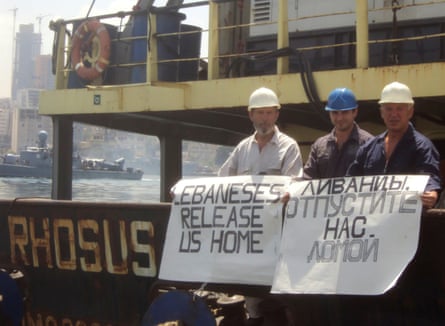 Six years later, he was shocked when he learned the Rhosus cargo had exploded.

“I was sorry for the people who died,” he says. “I felt pity that so many people died, innocent people, who had no connection to what happened.”

He blames the tragedy on “stupidity” and the actions of the Lebanese authorities. “They knew what kind of cargo it had and they arrested the ship so that it stayed there longer. I know they wanted money, but if they thought with their heads about the real danger, they should have given Grechushkin money just to get rid of this ship.”

“It’s like being a hostage,” he says of his abandonment aboard. “It’s terrorist logic: if you arrest the ship, either pay us to mind the ship or let us go.”

India floods: rescuers search for survivors among mud and debris

‘I can see the industry disappearing’: US fishermen sound alarm at plans for offshore wind

Why the Marble Arch Mound is a slippery slope to nowhere