Most of our 24 British bumblebee species follow the familiar stripy, mousy or red-tailed formats, but a few beautiful and rare ones are more distinctive. Darting between the honeysuckle flowers in an Empingham garden is a big bumblebee, sooty black from frons to tail. Bombus ruderatus subsp. perniger is a special form of the large garden bumblebee, its blackness never seen outside Britain.

When I first got to know this dark beauty, 25 years ago on south Cambridgeshire chalk, it was a rare beast heading towards extinction, but the species has since recovered a little, probably due to clover and vetch planted along arable field margins.

Bees and other pollinators are essential workers, but the dramatic loss of wildflower grassland and the use of pesticide have driven many species from the countryside where, despite its name, the large garden bumblebee really belongs. Most pollinators – including a couple of hundred solitary bees, and thousands of flies, beetles and moths – have demanding requirements, needing specific food plants for their larvae and a select range of plants for pollen and nectar; they cannot be sustained by arable field edges.

Oilseed rape is Europe’s dominant flowering crop, although the area is declining. You might think that such mass-flowering crops help bees, but their effect is complex and sometimes perverse. More than 20 solitary bee species benefit from oilseed rape, but for bumblebees there is a twist in the tail. During the brief bounty their numbers boom, but when the flowers are over they cannot find sufficient nectar and mass starvation sets in. Indeed, the amplified competition drives down populations of long-tongued bees such as B ruderatus. 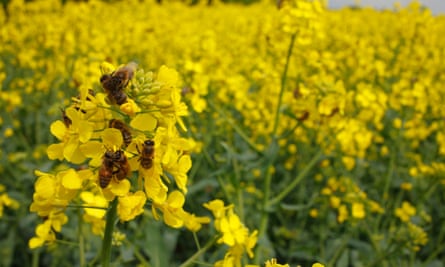 Brief overabundance of oilseed rape pollen and nectar thus helps some bee species but harms others, and is bad news for wild plants. A much greater benefit to wildlife could be provided by a landscape containing a wider variety of mass-flowering crops, grown at more moderate levels, so that through the spring and summer there is a nurturing continuity of nectar supply from beans, vetches, sunflowers and fruit trees as well as oilseed rape.