Country diary: even in storm-battered fields there are seeds of hope

We would like to inform you that due to several public holidays, all of which take place in October, the trading hours of various...
Read more

A borrowed yellow combine lurks behind a hedge, where it was left at 10 o’clock last night. My friend Richard Hudson, the farmer, had worked 17 hours on his birthday. “We were determined to keep going because we knew the weather was coming,” he says. “But eventually the machines couldn’t cope. I mean, look at it.” Barley stems, toppled every which way by wind last week, have been laid lower still by hammering rain.

Richard plants spring crops because it’s better for the environment and his cash flow, he tells me. “They need lower inputs, we can drill direct so we don’t have to plough, and we can leave winter stubble – it suits this land, and the skylarks especially. But it’s a risk.”

The dry spring was brutal for farming: growth stalled and many spring-sown crops nearly died. Rain eventually revived them but secondary stems put out by recovering plants matured a full month after the primary shoots. The earlier heads litter the ground, having dropped while Richard waited for the rest to ripen, but now there is a risk of losing the lot. It is his worst harvest in 14 years. 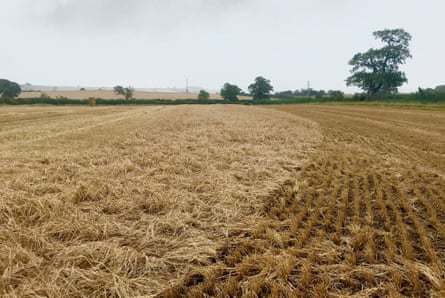 In another field, there is chaos of a different kind. Around a central crop of millet and sunflowers – a winter bird banquet – there is a 10-metre-wide, waist-deep tangle of clover, vetch, poppies, melilots and milk thistle, sown for pollen and nectar. Wading in, my jeans are soon soaked. I crouch and push aside a sodden thatch of vetch, loosing a small explosion of white moths. And beneath the thatch – oh! It’s a forest in miniature, with wildflower stems instead of soaring trunks, and gnats flying among them like tiny birds. The air there is warm, humid and perfectly still. The soil between the stems is bare, but peppered with seeds. This is where hope has hunkered down.

As I leave, a handful of finches burst from one of the broad, shaggy hedges. Their trajectory is that of broadcast seed, a low, fast, dispersive arc. Then the wind catches them and whisks them away in a formation too loose to be a flock, each bird riding its own flume of air over the storm-battered fields.

Previous articleButterflywatch: this fine season could last into October
Next article‘It was a feeling of terror: when will the water stop?’: Britain’s flood victims, six months on

The worldwide effort to combat critical levels of biodiversity loss will fail without far greater involvement from local communities, according to an international declaration.The...
Read more

Is my neighbourhood poisoning me? Living in the shadow of a gasworks redevelopment

Play Video 14:45 Since 2016 residents in Southall have questioned whether the gases released from the redevelopment of an old gasworks site could be damaging their...
Read more

Glacial lakes have grown rapidly around the world in recent decades, according to satellite images that reveal the impact of increased meltwater draining off...
Read more

Considering the general concerns about the financial situation of the market participants after the recent oil and stocks price drops as well as high...
Read more

Hopes that the resurgent predatory pine marten might "biologically control" grey squirrels and benefit the UK's native red squirrels have been dashed by a...
Read more
Trading With Politics