I’ll never look at a tussock of grass in the same way again. Hidden within this one was a ball of woven fronds that once cradled life like a beating heart at the centre of the dense cluster of stems.

We had spent more than an hour searching clumps of vegetation beside heathland in east Devon. The light was fading and the two of us, backs bent and several metres apart, moved from tussock to tussock, parting strands to carefully examine the inner recesses. Finally, my expert guide, Sarah Butcher, called me over. Concealed at knee height amid ranks of vertical stalks was a spherical mass, like a tangle of yarn caught in a loom.

This hollow ball of dried blades of grass, small enough to be cupped between two hands, was what we had come to find – a harvest mouse nest. “Lovely to know they’re here,” said Sarah. “Though you’re unlikely to spot harvest mice in the wild – they’re really tiny, and too wary and quick.”

The distribution of these thumb-length, gingery-brown mammals is most easily assessed by surveying nests, and Sarah organises the Devon Mammal Group’s harvest mouse project, which runs from October to March. At this time of year, when foliage dies back, the intricately woven constructions suspended above the ground are more visible.

Equipped with a prehensile tail to aid climbing, harvest mice (Micromys minutus) live among crops, in reed beds, beside ditches and along field margins in the southern half of Britain. Females build several nests from late spring until autumn, in which they raise separate litters of offspring. Each breeding chamber is used only once and dries out by the time the young leave, after just over a fortnight. Nests that are still green are potentially in use and should be left well alone. 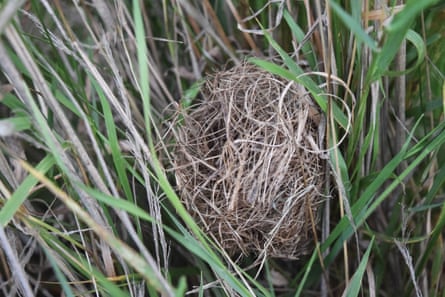 We search on without finding another. Sarah would have expected to see more here, she told me, but their populations fluctuate and most don’t live much longer than a year. “They’re declining and incredibly susceptible to weather extremes and cold winters.”

The single harvest mouse nest, the first I had ever come across, offered a glimpse into the secretive world where our smallest rodent dwells amid a towering forest of grass stems.