It’s 10am and the hens are getting excited and bustling around. Jo and Charles Mear are approaching the hutches carrying blue crates and the birds, heads popping up, know what’s inside: black soldier fly larvae or maggots.

Watching chickens peck around for maggots should be utterly normal. Insects are a natural part of a bird’s diet, but most hens today never see one in their lifetime. Instead, they are kept indoors and fed a grain- and soy-rich diet, typically in the form of pellets. 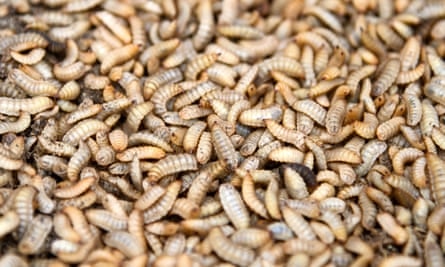 But insects are rich in protein and essential micronutrients. They require less space, produce fewer greenhouse gas emissions and have a high feed conversion rate. And if they could reduce, even in just a small way, the dominance of rainforest-destroying soy as the feed of choice for UK chickens, the benefits could be enormous.

“[Soy is] our Achilles heel. It’s the best pound for pound source of protein so it’s hard to convince farmers to move away from it,” says Charles.

Scientists at the UN’s Food and Agriculture Organization certainly believe they can, concluding that insects contain the necessary nutrients, especially protein, to replace between 25-100% of soymeal for chickens. And here, on this chicken farm in Cambridgeshire, an experiment is being carried out that might bring that reality a little closer.

The Mears keep around 28,000 birds across two barns in Cambridgeshire, supplying branded free-range eggs to the Co-op, Sainsbury’s, Asda and Tesco. “We’re trying to produce a more sustainable ‘over the hedge’ farm here where we source everything we need as locally as possible. So finding a way to replace soy has been the next step for us,” says Charles.

That opportunity presented itself when by chance he heard about two Cambridge graduates who had recently founded the insect startup Better Origin. “With the guys being so close by I just said to them to come and use our farm to trial the insects,” says Charles. 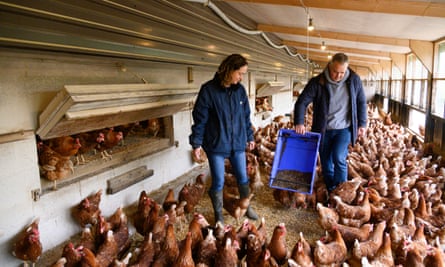 In March they began hosting the UK’s first AI-powered insect mini farm in a shipping container unit, growing larvae using food waste. The specialised insect-breeding unit was built off-site and delivered straight to the farm. Batches of maggot eggs arrive every few days, and the insects are reared in an automated setup that tracks their growth using thermal cameras and AI. All Charles and Jo need to do is keep the unit supplied with energy and waste feedstocks.

The larvae grow rapidly: “5,000 times its body mass in less than a couple of weeks”, according to Better Origin’s co-founder Fotis Fotiadis, and happily live off food and crop waste. After two weeks they are ready to be fed to the hens, and a new cycle of eggs is delivered to the farm to maintain a continuous supply of insects.

The results have been unequivocally positive, say the Mears. The birds – a wonderfully healthy and energetic flock – love it: they’ve worked out the time of the day when blue containers of maggots, rather than ready-made feed, arrive, and get particularly excited when they see them coming. 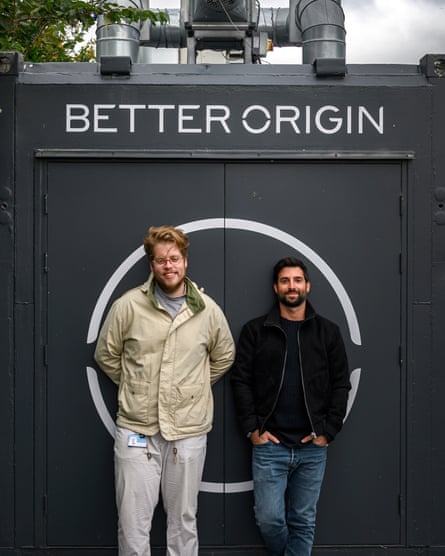 It has also encouraged the hens to carry out natural foraging behaviours, says Charles, who has noticed that as a result they seem less inclined to peck other birds. “Even after the maggots are all gone they carry on looking and stay active doing little scratch dances, which is really healthy for them.”

“It also brings a reduction in floor eggs [eggs laid on the floor which are downgraded by retailers and not able to be sold as fresh eggs]. As they are looking for food they don’t feel comfortable laying eggs out and about in the communal areas so go back to their nesting boxes to lay eggs.”

“Normally improved welfare outcomes come at a cost to productivity, but that’s not the case with feeding live insects,” says Fotiadis. “This is what chickens have evolved for millions of years to do, hunting and pecking around for their food.”

This is what chickens have evolved for millions of years to do, hunting and pecking around for their food

Feeding live insects has also been found to have a positive effect on the birds’ immune systems – the Mears haven’t used antibiotics on their farm this year – offering the potential to reduce antibiotic use, which continues to rise in the poultry sector.

For now, the ambition is to replace 5% of the birds’ soy-based diet with insects. And while the welfare and environmental benefits are already clear, the main selling point for farmers is economics, says Fotiadis, who calculates that supplementing diets with live insects can add 80p-GBP1 per hen of profit per year.

“We know there are welfare benefits, but these are hard to monitor. But we can prove to the rest of the farming industry the financial benefit of incorporating insects. It increases productivity (the birds produce more eggs), the quality of the eggs (less floor eggs) and improves feather cover (poor feather cover is linked to the need for more feed). It works for the farmer and makes them more money,” he says.

He and his team, who are installing a second insect-rearing unit on a chicken farm in Wales next month, have also tracked a 3% increase in shell strength in the hens’ eggs due to the rich source of calcium provided by the black soldier fly larvae. 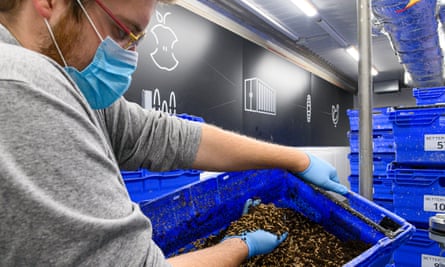 “This type of larvae is a missing link in the food chain. In nature there is no waste. The apple rots and is either absorbed by the soil or eaten and converted into nutrients by larvae. We take wasted nutrients and put them back into the food chain. It’s closer to nature and a much better way of farming,” says Fotiadis.

Back on the farm, Charles Mear can’t get enough of seeing how much his hens are enjoying the insects. “Psychologically, the hen always wants to go out and scratch about to loosen the soil and look for grub. I just love coming and seeing them itching to get out of the shed and look for it [the larvae] now they know it is going to be there.”

Sign up for the Animals farmed monthly update to get a roundup of the best farming and food stories across the world and keep up with our investigations. You can send us your stories and thoughts at [email protected]

Bank of England must do more to secure green recovery from Covid, say MPs

Drexciya: how Afrofuturism is inspiring a memorial to slavery at sea