Chris Lowe is no longer surprised when he sees drone footage of juvenile white sharks cruising near surfers and swimmers in southern California’s ocean waters.

Lowe directs the shark lab at California State University, Long Beach, and for the past 12 years he’s been monitoring populations of juvenile white sharks off the southern California coast with tags, drones and planes. This year, Lowe has already tagged a record 38 sharks, triple the number that were tagged last year. “Normally they’d be leaving by now, but instead we are seeing more sharks than ever.”

Two years ago, Lowe was asked by the state to investigate in more detail what sharks are doing along the beaches and how they behave in proximity to people – research that officials hope will help predict where and when the sharks show up and will help educate the public about the animals.

White sharks have been affected by humans for more than a century. Commercial fisheries caught them for years (many a fish taco was probably shark, Lowe said) and sharks’ primary adult food – marine mammals – has been hunted to the brink of extinction.

California moved to protect its white shark population in 1994, and has seen its numbers rise steadily since. In southern California, most sharks spotted near beaches are juveniles.

White sharks are born at 4.5 to 5ft long, and grow a foot each year for their first five years of life. They love southern California’s shallows because the water is warmer (young sharks lack the ability to retain heat in colder waters), safer from predators and full of their preferred food: stingrays. When they reach 10ft, they switch food sources to marine mammals like seals, and they spend more time away from the shoreline.

Lowe studies the animals from the land, in the water and from the skies.

He works closely with lifeguards, who are on the frontlines during the summer and fall beach season. His team also goes out to tag sharks, when they try to surgically implant the animals’ back with a finger-sized acoustic transmitter that connects with listening stations all along the coastline.

The acoustic stations display where the sharks are spending their time, and they allow the research team to track individual sharks for years – even when they cross the southern border with Mexico to Baja California. Some of the transmitters will last for a decade. “It’s a little like how you get a bill at the end of the month for a toll road,” said Lowe. “We use the same technology – the only difference is we get the bill, they don’t.”

In addition to tagging and tracking, the team also uses an autonomous underwater robot that can rise up and down and looks like a torpedo. It carries a full set of oceanographic sensors on its nose and a video camera. The robot allows the researchers to make high-resolution three-dimensional maps, and study why sharks are hanging out where they are: is it because there are more stingrays, warmer water, or fewer people?

Aerial drones are the team’s final piece of tech – the researchers fly drone surveys from the San Diego border with Mexico to Santa Barbara, to identify sharks’ location and size, and to see when they are close to people. “We can go through and count how many people are in the water, surfers, fishers, paddle boarders, and plot the distance to any shark,” Lowe said.

Lowe has found that not only are there more kid-sharks in the waters, they’re around longer, too. Juvenile white sharks typically leave California waters for Baja California in the fall, and return in the spring, but that pattern has been changing – probably due to warmer waters and an abundance of food. “We may have white sharks here year-round,” he said.

Up in Monterey Bay in northern California, David Ebert, who directs the Pacific Shark Research Center at Moss Landing Marine Laboratories, has seen a similar rise in numbers of juvenile white sharks off the coast.

Ebert recalled taking a helicopter ride in 2015 over the Monterey Bay and being astounded by what he saw from the sky: little sharks hanging out in small groups, right off the beach. 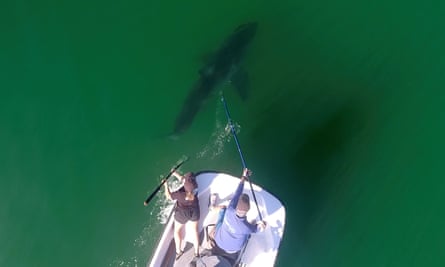 On one hand, the growing presence of the juveniles is a good sign, he said, because it shows the ecosystem is clean and there is enough food to support the sharks. But it also points to how the climate crisis, and warmer ocean temperatures, can shift the range of the animals. Southern California used to be at the northern limit of their range, and now it might be in the middle, Ebert said.

Even with more sharks in the water, Ebert said humans have little to fear from the juveniles. Since 1950, when the state started keeping records, there have been on average only three or four attacks a year in California, Ebert says – even as the state population has swelled from 15 million to 40 million. “There are so many people in the water: you have paddle boards, kayaks, wetsuits, but the number of attacks hasn’t really changed. That tells you that people are not on the menu, they’re not out here hunting people.”

“They’re an amazing animal to see in person,” he added. “I think it’s one of those rare wildlife experiences, you can spend your whole life out there on the water and never see one.”

Lowe, too, said that generally when he sees sharks swimming around people, the people have no idea – and the sharks generally don’t care.

He and his team now hope to create a shark forecast – “it’s going to be a sharky week!” – that can help educate beachgoers about the sharks in California’s waters. Lowe said he could see a future where lifeguards can post signs about where the juveniles are hanging out, alongside information about the tides and waves. He says that if you happen to see a group of sharks on the beach, it’s actually a cause for celebration: “They are keeping the stingray population down, and they generally don’t care about people.”

Who will clean up the ‘billion-dollar mess’ of abandoned US oilwells?