How do I get started?

For all the attention low-traffic neighbourhoods (LTNs) are getting, they are very simple things. Strategic “point closures” allow vehicle access to all addresses in a neighbourhood, but reduce through traffic. They can be done with planters, or lockable bollards, or a combination of both.

In London, impressive maps of potential emergency LTNs (funded by the government’s emergency active travel fund) were swiftly drawn up using existing data on housing density, indices of deprivation, access to green space and potential trips that could be converted to cycling and walking. This helped to show where LTNs would best help residents stay healthy and avoid public transport during the pandemic.

Across the rest of the country, Sustrans, the walking and cycling charity, and the London Cycling Campaign and Living Streets have documents to help. But if there aren’t already LTNs in your area, you may have to do some of the legwork yourself.

Clyde Loakes is deputy leader of Waltham Forest council in north London, and has worked to bring in cycling and walking schemes since 2013. He points out that controlled parking zones and 20mph limits are important precursors to LTNs, so if you don’t have those, they might be a good place to start.

A positive experience with a school street can be a springboard to more ambitious plans and school streets or play streets can start to build consensus for further changes. Playing Out has good resources.

Often councils initiate low-traffic neighbourhoods, so if there are LTNs elsewhere in your borough and you want more, you need to contact your council and tell them.

Local residents should be asked about issues they feel need addressing, and kept in the conversation throughout, alongside data from traffic counts and on air pollution, access to green space and deprivation.

London Cycling Campaign’s Simon Munk says: “Councils that do well say: ‘We’re thinking about doing this, you’ve told us there’s too much traffic, this is what we’re proposing, what do you think, how would you improve it?'”

Ben Addy, Sustrans’ head of collaborative design, recommends talking to people in “democratic spaces” – not just your neighbours, but parents at the school gates, for example.

Ward councillors should be part of any proposals from the offset, says Addy, attending meetings, and understanding the benefits “so they feel they have the tools to respond effectively and consistently with the message”. A good start would be getting a group together and attending local councillors’ surgeries on a rota basis.

Be honest about the downsides of LTNs, and that short trips in the car will become less convenient. “Almost all LTNs will cause some opposition,” says Munk, “and if your council isn’t willing to face that opposition don’t bother – instead spend time getting political will because otherwise it won’t work.”

Make sure the council promises to listen. This month Leeds announced its first new trial LTNs (the city, like many around the UK, has historic LTNs) in November. Councillors pledged to “listen closely to local residents and their experiences, the positives and the negatives while they are in place…to help determine next steps for the scheme”.

What are the benefits?

Living Streets calls LTNs “the single most effective method of increasing active travel”. Hackney council in London proved that with a series of “modal filters” introduced between 2001 and 2009 across the borough in that time car trips halved and cycling doubled.

Quieter streets with fewer cars and more green space hopefully mean less social isolation and better air quality. People living in LTNs talk about hearing more birds, a stronger sense of community, and the pleasure of seeing young people on bicycles on roads which are much safer.

They can be great for business too, with people spending more time in their local area. Steve Robson owns a hardware store in Newcastle: despite his initial opposition to the LTN that was introduced on his road, he is now a big fan and has even expanded his shop. 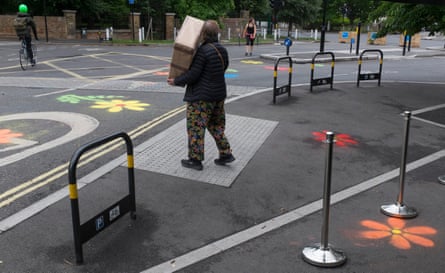 Guy’s and St Thomas’ NHS foundation trust is now looking to fund two LTNs in Southwark in London, because for GBP250,000 it knows they are a cost-effective way of improving public health.

How do I win over undecided folk?

“This is about your area, the place you live in, and if you want this, you have to convince people in the neighbourhood it’s making a difference,” says Loakes. “It’s one thing when it’s a council employee at the door, it’s another when it’s your neighbour Mary, or it’s someone your kids have play dates with.

“That’s why we had so many community champions [pan-London LTN advocates], people who are willing to have conversations with neighbours. They’ve taken ownership.”

Sarah Berry campaigned to support her local LTN in south London, after she started enjoying the quieter roads. She was also behind the now widely used “road open” signs. She says: “Once those fears get established, people get too scared to say they like the LTNs because they don’t want to get into a fight with their neighbour or fear they’ll become a target of campaigns to switch them to the other side. No one wants to have to deal with that in their community.

“We helped create a space where celebrating the changes and speaking about the benefits was something people felt encouraged and allowed to do.

What if my neighbours are against it?

“It’s easy just to think that the people who think differently don’t care about your kids,” says Addy. “And if you’re at that point, you’re just going to reach a total impasse, and things will escalate. Typically, what that then results in is a consultation where people are just entrenched. It’s much easier to paint a bleak picture than a wonderful picture, and people are much more likely to respond to a consultation negatively than positively if that’s the kind of vibe. That comes from people not understanding each other, and not wanting to have that conversation.”

Information sharing is important, says Berry. An equalities impact analysis on the local consultation website showed that no groups were disadvantaged by the LTN, which Berry’s campaign shared. “It totally destroyed the arguments of those opposed.”

For her it’s also about a community taking ownership of the space. Her campaign talked to local businesses and added benches to planters outside a couple of shops in response, for shopkeepers or their customers to sit on. Residents even decorated the planters for Halloween.

She says: “There was a woman here who, all her friends were opposed, and she was too, and she got involved in greening the street, and now she’s one of the most vocal advocates, not because someone told her ‘you’re wrong’ but because she got to use her street in the best way.”

Be prepared for a backlash

Simon Still, from Lambeth Cycling Campaign, says: “There’s been a fair bit of shouting in the streets and online abuse, ‘we know where you live’-type messages.

“It’s funny minor restrictions on people’s ability to drive brings out such extreme behaviours. People are very protective about what they see as their right to drive everywhere. For the best part of a century the car has been sold as an enabler of personal freedom, but what a car owner gets takes away a lot of personal freedoms from people who don’t own a car. I suppose what our campaign’s trying to do is reinstate some of those freedoms.” 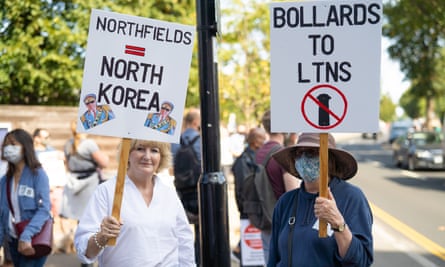 Munk adds: “One of the great things happening is this whole trial process. People are trying to stop a consultation because they’re scared, but if you don’t like it later down the line, you can pull out.”

Our LTN is at risk of being scrapped. How do I save it?

The government’s emergency active travel fund paid for “experimental” LTNs on the condition they went in quickly. Although the consultation period running alongside the temporary measures means people can experience the changes before drawing conclusions, it also upset a lot of people.

As Munk says: “If there’s been one thing over everything else from the opposition it’s that there has been no consultation.”

According to a chat with one council officer on an LTN scheme in east London, councils have to really stay on top of how the scheme develops. “That may mean dealing with civil disobedience: if a sign’s painted over, restore it the next day; if a bollard is removed, replace it immediately”.

If something gets pulled it isn’t necessarily the end, and ideas can percolate into acceptance over time. In Waltham Forest, two LTN schemes initially opposed by residents, in Hilltop and Markhouse, were later “overwhelmingly voted on”. Waltham Forest’s first LTN saw 41% initial opposition to changes; six years later, after a 44% reduction in traffic, just 1.7% of residents would go back to how it was.

Is it worth the aggro?

Loakes says he understands councillors not wanting something controversial hanging over them come election time but such fears weren’t borne out in 2018’s local elections. “If I believed and listened to the social media shouting and the literature coming through my letterbox … we were going to lose the council as a Labour administration. Best case, we were going to lose a number of seats”.

In fact, councillors who supported LTNs, including Loakes, saw their majorities increase. 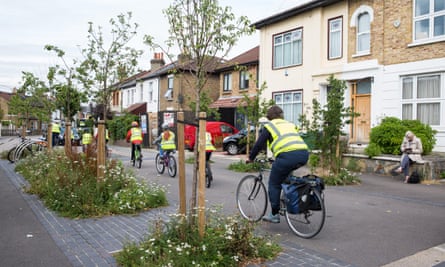 “The Mini Holland [the original name for the borough’s cycling and walking programme] work is something I’m incredibly proud of,” he says. “It’s shaping local, national and even international politics on how we can make our neighbourhoods better, for people, the environment and economies.

“I went into this as an issue around securing greater modal shift from cars in outer London, purely as a transport, highways scheme. However, when shops in Francis Road and Orford Road started to thrive and people came from outside the area to visit them, I began to see other benefits.

“You realise it’s not just a modal shift transport scheme, it’s a neighbourhood transformation scheme – so many people benefit in one way or other from these schemes, on a scale we’ve not seen for many years.

“Who doesn’t want to hear birdsong instead of a constant stream of traffic?”

Possible campaigns on this and on other environmental issues.

The London Cycling Campaign has been doing fantastic work on this topic and has lots of helpful guidance advice.

‘The next pandemic’: drought is a hidden global crisis, UN says