As Americans celebrated Saint Patrick’s Day with a feast of $1,400 stimulus checks, the crypto market turned a fitting shade of green.

Prices surpassed $60K early in the week, with two out of five stimulus checks landing in the crypto market, according to a recent survey. This influx of funds was matched by growing institutional interest, with Morgan Stanley announcing three Bitcoin investment products to meet growing demand. 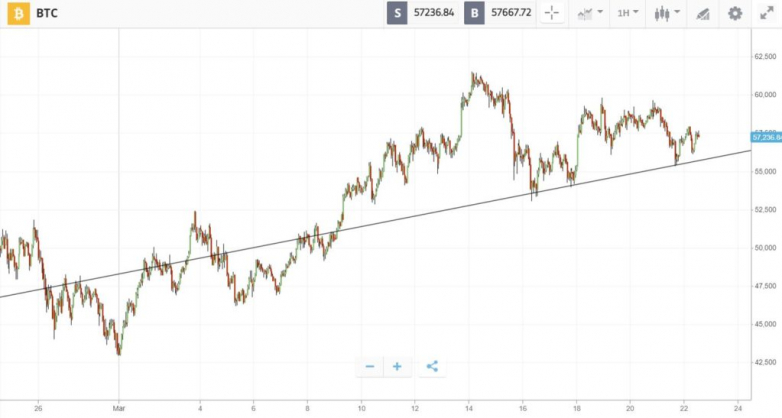 As the weekend hit, Bitcoin pulled back while altcoins continued to party. Cardano rallied 15% to reach all-time highs above $1.40, and TRON and EOS approached double-digit gains.

Wall St. giant Morgan Stanley has made an explosive entrance to the cryptoasset market.

The bank disclosed on Wednesday that it will offer clients access to three Bitcoin funds via its platform, and penned a new investor note making the case for crypto as an emerging asset class. South Korean media reports the bank is also bidding to buy local exchange Bithumb.

As the first major U.S. bank to offer clients exposure to Bitcoin, Morgan Stanley’s adoption marks another critical milestone for the maturing asset class, and one that could encourage other banks to offer similar Bitcoin funds to their customers.

Howard Marks comes round to Bitcoin

Legendary investor Howard Marks has changed his tune on cryptocurrency.

The billionaire cofounder of Oaktree Capital called Bitcoin an “unfounded fad” in 2017, but told Korea Economic Daily last week that his comments were a “knee-jerk reaction.” He then described the multiple benefits of Bitcoin, including being able to preserve privacy and trade 24 hours a day.

Marks is the latest to join a long line of former skeptics embracing Bitcoin. This includes Billionaire investor Mark Cuban, who famously said he’d rather have bananas than Bitcoin, and Ray Dalio, who recently called the cryptocurrency “one hell of an invention” after previously criticizing it for “excess volatility.”

As government checks continue to hit American bank accounts, expectations are widespread for stimulus-fueled Bitcoin buying in the coming week.

This could be coupled with big announcements. Robby Gutmann, the co-founder of $10B asset manager Stone Ridge, said on a podcast that this week will see a “drumbeat of pretty game-changing milestones” from big financial firms adopting Bitcoin.

On the macroeconomic front, traders are likely to be watching Jerome Powell’s and Janet Yellen’s joint testimony on Tuesday and Wednesday for clues on future monetary policy.

Scottish forests could save red squirrel from extinction

Country diary: fill your nose with the cornucopia of July scents